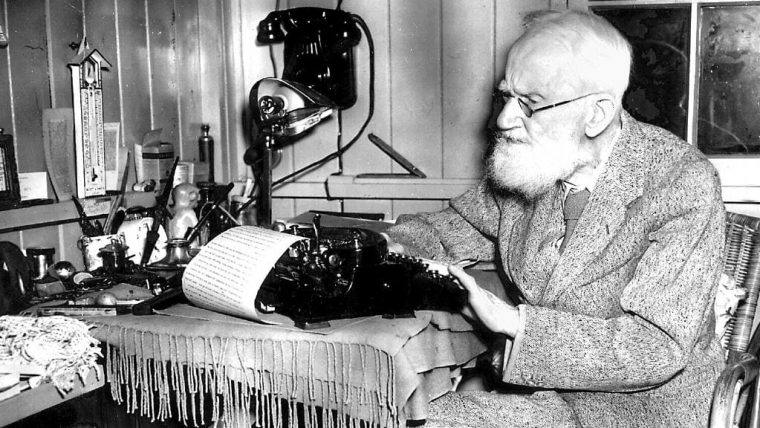 A happy family is but an earlier heaven.

A life spent making mistakes is not only more honorable, but more useful than a life spent doing nothing.

Make it a rule never to give a child a book you would not read yourself.

Animals are my friends…and I don’t eat my friends.

You see things; you say, ‘Why?’ But I dream things that never were; and I say ‘Why not?

Why should we take advice on sex from the pope? If he knows anything about it, he shouldn’t!

The liar’s punishment is, not in the least that he is not believed, but that he cannot believe anyone else.

My way of joking is to tell the truth. It’s the funniest joke in the world.

Never wrestle with pigs. You both get dirty and the pig likes it.

War does not decide who is right but who is left.

A Native American elder once described his own inner struggles in this manner: Inside of me there are two dogs. One of the dogs is mean and evil. The other dog is good. The mean dog fights
the good dog all the time. When asked which dog wins, he reflected for a moment and replied,

The one I feed the most.

As long as I have a want, I have a reason for living. Satisfaction is death.

Both optimists and pessimists contribute to society. The optimist invents the aeroplane, the pessimist the parachute.

Liberty means responsibility. That is why most men dread it.

Hatred is the coward’s revenge for being intimidated.

I am afraid we must make the world honest before we can honestly say to our children that honesty is the best policy.

Human beings are the only animals of which I am thoroughly and cravenly afraid.

The more things a man is ashamed of, the more respectable he is.

The things most people want to know about are usually none of their business.

The test of a man’s or woman’s breeding is how they behave in a quarrel.

There is no subject on which more dangerous nonsense is talked and thought than marriage.

A doctor’s reputation is made by the number of eminent men who die under his care.

When I was young, I observed that nine out of ten things I did were failures. So I did ten times more work.

The English are not a very spiritual people, so they invented cricket to give them some idea of eternity.

Assassination is the extreme form of censorship.

There is no satisfaction in hanging a man who does not object to it.

A book is like a child: it is easier to bring it into the world than to control it when it is launched there.

Hell is full of musical amateurs: music is the brandy of the damned. May not one lost soul be permitted to abstain?

What is life but a series of inspired follies? The difficulty is to find them to do. Never lose a chance: it doesn’t come every day.

A man of my spiritual intensity does not eat corpses.

Beware of false knowledge; it is more dangerous than ignorance.

Do not waste your time on Social Questions. What is the matter with the poor is

Poverty; what is the matter with the rich is Uselessness.

A government that robs Peter to pay Paul can always depend on the support of Paul.

There are two tragedies in life. One is to lose your heart’s desire. The other is to gain it.